Herman Miller is all in on recycled plastic. What’s taking the rest of the industry so long? 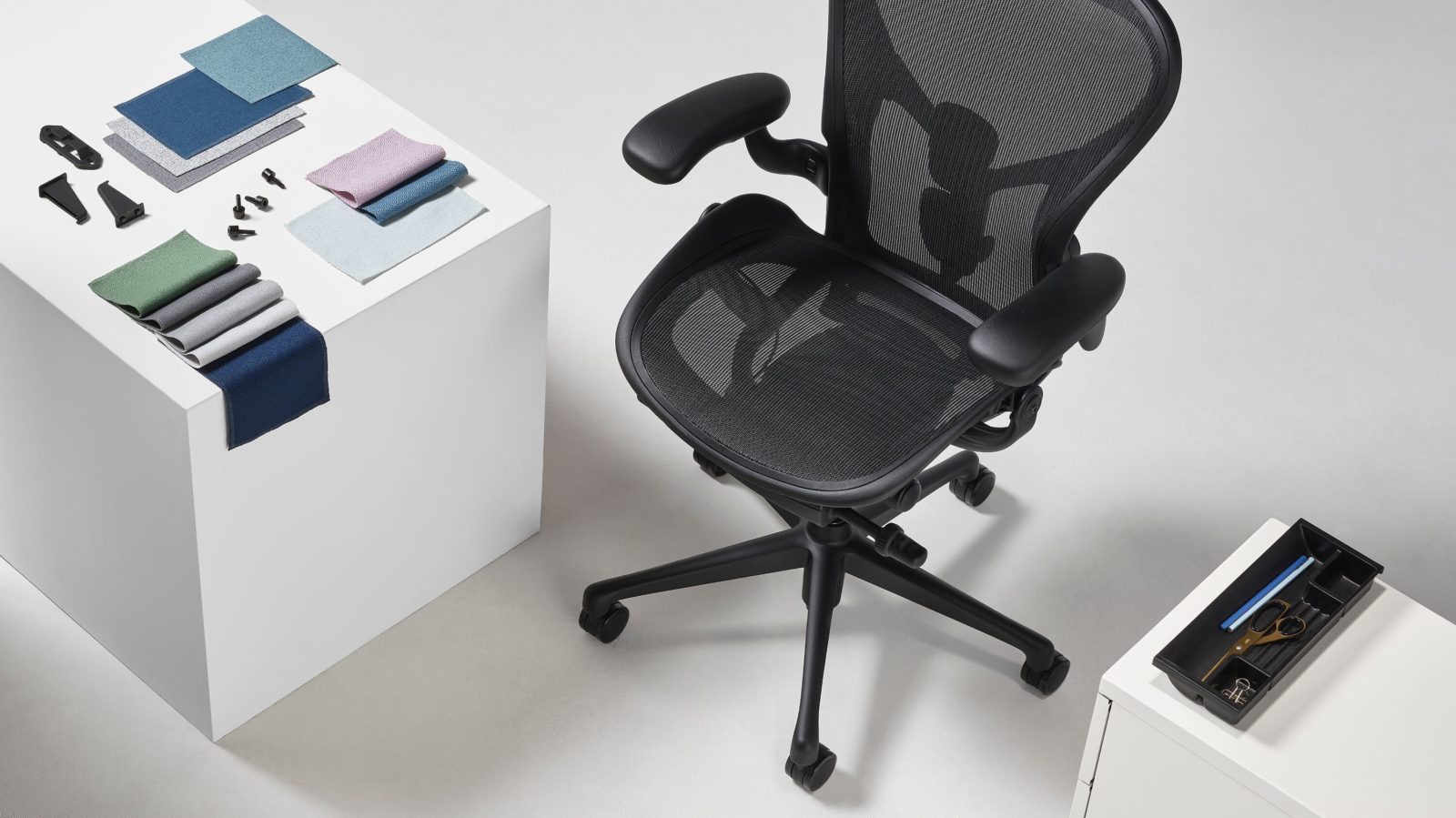 As corporations and consumers alike increasingly prioritize sustainability, it’s become more common for companies to make sustainability pledges. Ikea pledged to use all recycled and Forest Stewardship Council–certified wood by the end of 2020. Pottery Barn has committed to planting 3 million trees by 2023. And Herman Miller has made a pledge to use 50 percent recycled content in all materials by 2030, a goal it is all the closer to achieving as the company announced today that its entire portfolio of the bestselling Aeron chair will now contain recycled ocean-bound plastic.

The Aeron chair is the latest in a growing list of products Herman Miller has reengineered using mismanaged plastic found near waterways, like the Sayl chair and its new textile collection, Revenio, which is made of 100 percent recycled materials and includes a biodegradable polyester. With the goal of using recycled elements in all Herman Miller products, Gabe Wing, the company’s director of sustainability, says that the choice to focus on the Aeron came down to the chair’s popularity. “Going into this process over a year ago, we were looking at where we could apply these ocean-bound plastics in a way that would have the biggest impact,” he explains. “The Aeron is one of our biggest sellers and it uses a lot of plastic. And, on a personal note, having the opportunity to influence such an iconic product was also appealing.”

It’s not just behemoth brands like Herman Miller that are tapping into the potential for using recycled plastic in furniture—a handful of smaller manufacturers are experimenting with the material as well. Last year, Blu Dot introduced the Decade chair, its first injection-molded plastic chair, which is made of 100 percent recycled polypropylene. Outdoor furniture maker Loll Designs has been using recycled plastics in its entire line since the brand’s founding over 14 years ago. Belgium-based children’s furniture brand Ecobirdy got particularly creative in recent years, making a line of chairs, tables, lamps and storage bins using recycled plastic toys with a terrazzo-like effect. (The line is now in the permanent collection of five museums across Europe, including London’s Victoria & Albert Museum of Childhood.) But if companies are able to engineer beautiful, museum-caliber furniture out of recycled plastic, why is the material still used so scarcely in the home furnishings industry?

The most obvious answer is cost. Even for a company as big as Herman Miller, it took more than a year to develop the new supply chains needed to source their ocean-bound plastic, work it into the company’s manufacturing process and create a product that had the same integrity as those made with virgin plastic. The recycled plastic itself can often be more expensive, as well. “The market for these materials is constantly moving,” says Wing. “When we started this journey, the cost difference between virgin and recycled plastic was pretty small. Even over the last year, that gap has grown and there is now a premium to move to ocean-bound plastic.”

It may seem counterintuitive that a used component would cost more than a brand-new one, but plastic is a particularly complicated material. While there is currently more used plastic being produced than ever before, with 381 million tons of plastic waste being produced yearly (a number set to double by 2034), shockingly little of it is actually recycled—only about 9 percent. That low percentage stems from a variety of factors, including poor education on proper recycling in most countries (for example, containers must be cleaned before they can be accepted—a plastic jar plastered with peanut butter residue might as well be placed in the garbage), coupled with the fact that the bulk of single-use plastics simply aren’t recyclable.

The global recycling effort got even more complicated in 2018, when China implemented the National Sword policy, banning the import of most plastics and other materials headed for Chinese recycling processors. For decades, the United States and Europe had shipped their recycling to the country for processing; over time, China became overwhelmed with the amount of contaminated unrecyclable materials coming in. Through its new policy, it accepts only clean, high-grade materials and imposes a 99.5 percent purity standard on recyclables that it is willing to accept. It’s a standard that most countries can’t meet.

As a result, many U.S. cities slashed recycling programs; globally, rates of incinerating recycling are up exponentially. According to a 2019 article in the Yale School of the Environment journal, 11 million tons of waste were burned in England in 2018, up 665,000 tons from the previous year. While the incineration is usually tied to waste-to-energy efforts, studies have shown that even the most modern incinerators can’t prevent the harmful pollutants emitted from burning plastics and other waste.

This was well before COVID hit, further disrupting the supply chains that companies like Loll Designs use to source recycled plastic domestically. The supply of American-made recycled plastics (a scarce practice even before the pandemic) is currently so limited and costly that Loll has had to supplement with virgin plastic, a choice that the brand’s sales manager, Heather Strasser, calls heartbreaking. “It was crushing for all of us, because we’ve used 100 percent recycled plastic until last year,” she says. “But keeping our manufacturing and our materials entirely made in America is a major priority to us as well.” The brand has begun to supplement with other environmentally conscious initiatives, like moving toward a zero-waste model, sending replacement parts as needed, and accepting its products back at the end of their life to divert them from landfills.

Ocean-bound plastic is collected, crushed and then made into pellets before being molded into a new product.

China’s ban on imports has caused recycling processing efforts to trickle to other countries, most of which don’t have the massive reprocessing infrastructure that it developed over many years, leading to more mismanaged waste scattered across the globe. Herman Miller’s ocean-bound plastics are sourced from regions like Haiti, Indonesia and India, where waste pickers (the industry term) collect plastics near waterways and sell them back to an aggregator. “There’s the environmental impact of diverting these plastics, but there is also a social impact,” says Wing. “For these waste pickers, this is an income for people that wouldn’t have it otherwise, and we’re helping to create demand for what they do.”

Once the waste is collected by the pickers, the plastics are sent to a reprocessing facility where they are cleaned, crushed and melted down into pellets. The pellets then make their way to Herman Miller’s manufacturing plants and are melted down again and shot into injection molds. It’s a process that sounds a lot more straightforward than it is. “There’s a perception that you just have to source the material and run it through the same process you already have in place,” says Wing. “I assure you, it 100 percent does not work that way.”

For the redevelopment of the Aeron chair using the ocean-bound plastic, Wing says that figuring out how to deal with the variations that occur in the aggregated recycled plastic was the first hurdle. “There can be changes in the way the material flows into our tools,” he explains. “When we ran those first shots into our molds, we’d get half a part. So, you’d go from having a nice looking complete part with virgin plastic, and then when we switched to recycled plastic, we only got half a part, or the part would get stuck in the tool. It took quite a bit of time to work with the material suppliers in order to understand how to modify our process so that we could actually use it. In some cases, we’ve had to modify our tools in order to work with these materials. It’s far from a drop-in replacement.”

Color variations are another challenge when working with recycled plastic, as the pellets that companies have to work with often take on a blue-gray hue that’s hard to alter, other than making it darker. “To paraphrase Henry Ford: You can have it any color you want, as long as it’s black,” says Wing. To that end, Herman Miller is releasing an additional colorway of the Aeron chair, Onyx Ultra Matte, which will be made of 2.5 pounds of ocean-bound plastic, the most of the range, while other colorways have less of the material because of the difficulties posed by the coloration.

To help meet its 2030 goal, Herman Miller has partnered with an organization called NextWave Plastics, which is made up of a consortium of companies that have committed to diverting a minimum of 25,000 metric tons of plastic—the equivalent of 1.2 billion single-use plastic water bottles—from entering the ocean by the end of 2025. The nine other members range from titans like Dell, HP, Ikea, and Humanscale to sustainable luggage brand Solgaard, bicycle company Trek, credit card manufacturer CPI Card Group, carpet brand Interface, and a company called Bureo, which develops products out of fishing nets.

The 10 companies have agreed to work collaboratively, sharing their knowledge and experience with ocean-bound plastics as they go. While it might seem like the lessons learned from Herman Miller’s Aeron chair wouldn’t apply to a bicycle company, it’s the knowledge about working with the material and each company’s experience with different suppliers that can be a valuable asset. “There’s a power in numbers here,” says Kendall Starkman, the director of the NextWave Plastics initiative. “In order to meet the scale of this problem, companies need to all be coming to the fight. There’s so much more that they can do together.”

Starkman also points out that the more companies that utilize these supply chains, the more demand is created—and the more these fledgling channels can be developed, making the materials more readily available.

While the issues surrounding both the recycling and plastics industry are herculean at best, Wing and Starkman are confident that if enough companies are willing to take up arms and collaborate on solutions, a dent can be made. “I feel that we’re demonstrating that with some hard work you can take these unwanted materials and put them in premium products,” says Wing. “It’s a signal to people inside and outside our industry that you can do this, and you can do it in a way that makes business sense.”

Making the best better for Earth