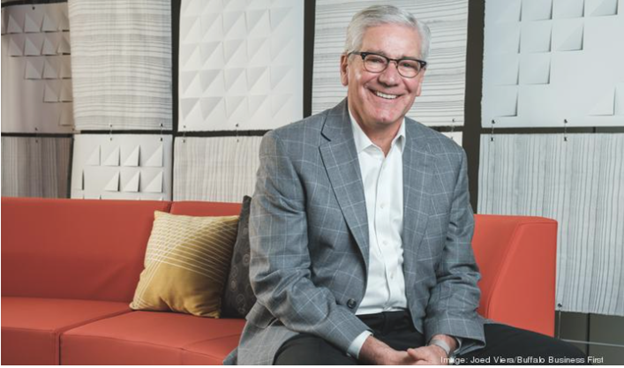 Ask Michael Bonitatibus what Millington Lockwood Inc. does and he’ll probably tell you what it doesn’t do.

“It’s a strange way to answer the question, but we don’t (just) sell furniture,” said Bonitatibus, president and CEO. “We really try to understand what our customers need and what they want. We try to activate the space and floor plate because every space has a story.”

Bonitatibus, 61, grew up in Lackawanna and was hired as a salesman at Millington Lockwood in his 20s. Three years passed and he took a sales job at Herman Miller Corp., an office furniture manufacturer in Michigan.

Herman Miller eventually sent him to Boston for three years. Tired of the commute and anticipating a job relocation, he came back to Buffalo with a plan to acquire Millington Lockwood over a multi-year period. The sale was completed in 2002. The company since has grown from 23 employees and approximately $8 million in sales to a 75-person workforce with sales of $35 million.

Bonitatibus is the sixth owner of the 135-year-old company. The Genesee Street office is located across from Buffalo Niagara International Airport.

You were supposed to be a teacher. How did you end up in office design? When I got out of college, the economy was a lot different than it is now. Districts were laying people off and there were no teaching jobs in Western New York. I was able to get a job in Texas, which I did take. The starting salary was $10,200. But it was a boom time down there and the cost of living was expensive, so I came back. I had a minor in economics (from SUNY Buffalo State) so I said, “I’m going to try this business thing.” I interviewed at Millington Lockwood and got a job in business development as a salesman.

You worked in Boston during your eight-year tenure at Herman Miller. Why did you come back to Buffalo? Boston was a tough place to work. There was a quality of life I was forced to deal with because of the traffic and size of the community. I was 29 when I moved there and I had two children with me. So going there and not knowing a lot of people, it was much more difficult than the friendly Buffalo feeling we all talk about. And it was important to me to be close to family and have a sense of neighborhood. Herman Miller was already talking about my next move, but I didn’t want to be a transient; I didn’t want to be on the corporate carousel. I came back to work for (former Millington Lockwood owner) Kevin McNamara. He and I put a plan together for me to buy the business and 10 years later I took ownership.

How did you grow the company? When I bought the company, we were focused on the mid to upper part of the market. But we started to bring in products with price points that were a little bit less. We also acquired a company in 2006 that sold pre-owned and refurbished furniture. Then we added another product line that helps us design interior spaces that are totally customizable and show up in 30 days, so we can build better, cheaper and faster. We also have some really good people here, people who have been with us for a long time, and I think that speaks to the fact that we’re a good place to work.

There’s a lot of development underway in this region. How does Millington Lockwood benefit? I have to say the (economic) pie used to be very stagnant and competitors used to fight over the same slice of pie. So I think what’s happening now is truly energizing. It’s not like there’s one silver bullet or one big company driving it. We are seeing movement in all sorts of sectors and also in small business. I can’t tell you the number of small businesses coming to us because they’re growing. So we are a good barometer of the economy. When those kinds of companies come to us, you know things are going well.